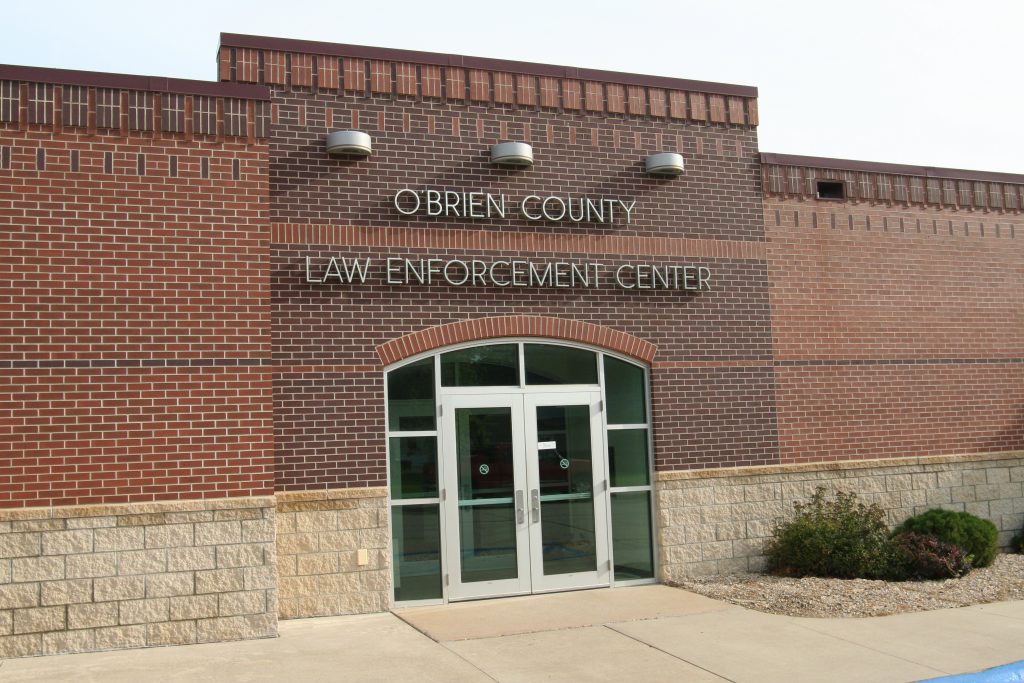 O’Brien County is twenty-four miles square, containing a superficial area of 576 square miles, and is divided into sixteen townships. The largest stream is the Little Sioux River, which crosses the southeast corner. Henry Creek rises in the northeastern part of the county, draining several townships while Waterman and Mill Creeks flow through the central townships, and are all branches of the Little Sioux. Floyd River rises in several branches in the northwestern part of the county, affording drainage to several townships. The supply of timber is very limited, being mostly confined to groves on the Little Sioux, in the southeastern corner of the county, and is chiefly oak, hickory, ample, elm and cottonwood. When protected from the fires timber grows rapidly, and many of the settlers have promising groves of planted trees. The soil of this region is exceedingly productive, and in its wild state produces luxuriant crops of native grass, which is excellent for pasturage or hay. The bottom or tablelands along the streams are composed of a deep, rich vegetable mold, on a sub-soil resembling clay mixed with gravel. The soil of the upland prairies is the highly productive bluff deposit of this part of the State, with a vegetable coating, and produces in great perfection all kinds of grain and vegetables. The surface is generally undulating, and susceptible of easy cultivation. There are no exposures of rocks “in place,” or in quarries, in the county, the only stone being the boulders that are found scattered over the surface, and are mostly granite, red-quartzite, with a few magnesium limestone. The material of the bluff formation is manufactured into very good bricks, and this, of course, is abundant. Excellent pure water is easily obtained in all places at a few feet below the surface. The great abundance of excellent wild grass and pure water renders this a fine region for stock raising, especially where provision is made for winter shelter. In this, as well as other counties in this part of the State, settlers must plant trees to insure a future supply of fuel, and thus may soon obviate the necessity of depending upon coal shipped from other parts of the state.

In 1850 the Iowa State Legislature appointed a committee for the purpose of giving names to 50 of its counties. The committee named some of the counties after patriots of Ireland. O’Brien County was named after William Smith O’Brien, a man of marked ability and loyal to his native country. The county was without a settler until the first white settlers in O’Brien County moved here in July of 1856. They were H.H. Waterman and family and they located on the northeast quarter of section 26, township 94, range 39. They moved here from Bremer County, Iowa, but were formerly from the State of New York. In order to organize the County an election was held in February 1860 to elect the first officers. After the election the first courthouse was built near Mr. Waterman’s residence. In 1870 the county purchased property and built another courthouse (14×16 foot), which was later, destroyed by fire. In 1872 an election was held to determine if a permanent location for the courthouse should be set up. To get the courthouse out of the hands of the gangs, it was decided that is should be moved to a 40 acre tract in the exact center of the County which later became Primghar. The courthouse was then moved from the Waterman Township to Primghar. In 1874 a courthouse was built in the present location for a cost of $2,000 and this one was approx. 35 feet square. In 1887 the Board decided to build a new courthouse for a total cost of $5,000, which was the highest amount the Board, allowed to appropriate at that time. The actual cost was $6,000 so the good people of Primghar signed written agreements to haul the material without cost to the County from the railroad stations at Sanborn & Paullina. On November 3, 1914 a special election was held to vote on building a new courthouse. The cost was $160,000 and it was completed and occupied April 1917. It still stands and is used today (2010). There were four county seat contests. The first fight was in 1872. The second was in 1879, the third was in 1882 and the fourth was in 1911. A final countywide vote settled the issue with the courthouse remaining in Primghar.

History of the O’Brien County Jail

The history of the O’Brien County Jail indicates from our sources of information there have been four County Jails built since the county’s inception plus a temporary jail. The first jail was built in 1874 and was approx. 16 x 24 feet in size and stood near the southeast corner of the courthouse square. It consisted of timbers, two by six, laid flat on each other, and filled through and though thickly with large spikes. It was much laughed at as a bastille. The sharp metal spikes kept many from breaking out. It was later sold by the county as a residence and in 1907 was burned down.

The second jail was 25 x 36 feet and built of faced brick and shows a date of July 9, 1890. The Pauley Jail Company of St. Louis, MO built it. The cost was over just about $5,000. Some additions in improved cells and patent locking apparatus were later added. It stood on block 8 of Primghar, next west block from the public square.

The third jail was built in 1926 and consisted of faced brick and also had the Pauley Jail Company ironworks and locking system. It stood across the street northeast of the current courthouse. It was both a jail that held 13 prisoners and also contained the home of the Sheriff and his family. This building was demolished in 1998. The temporary jail was established in 1998 in the old Farm Bureau building located on 2nd street southeast in Primghar to be used until the new jail was built at the current location of 240 1st street Primghar. The Farm Bureau building was remodeled to house 15 inmates complete with kitchen, booking room, laundry, offices and county 911 communications. This building was occupied for just less than 19 months.

The fourth and current jail was built in 1998 and completed in November of 2000. It is a 42-bed jail with total capacity to house up to 54 inmates and just less than 25,000 square feet. The voters passed the bond issue by 82% approval and the cost was $3,700,000 to build and furnish the facility. The facility houses the county 911 center, office space for sheriff’s personnel, Emergency Management Agency staff along with training rooms and full featured kitchen. The jail was built at the same location as the “third jail” location of 240 1st street NE Primghar. The facility is very modern and technologically equipped.