The Patrol Division is responsible for patrolling the rural & un-incorporated areas of the county. They investigate rural crimes, transport persons to the various mental institutions and jails across the state. They also assist local Police Departments,  provide security for the county court system and serve all types  of civil process.

The O’Brien County Sheriff’s Office Canine Unit has been “restarted” with the acquisition of a new canine named Ella. In the late 90s the Sheriff’s Office had a canine that was used primarily for narcotics detection only. That program lasted approximately 5 years. In 2012 Deputy Sheriff Lee Reuvers indicated interest in managing a canine for narcotics detection, tracking and evidence/article searching. O’Brien County Sheriff Michael Anderson implemented in the annual budget monies to start the project. The project from the start was to be funded by donations. The fundraising started in March of 2013. The goal was totally funded and we received over $15,000 in contributions. We will always accept donations for the canine program. Anyone wishing to donate can send a check for any amount they wish to donate and we will provide them a receipt for a tax deduction if they wish. Donations may be mailed to: O’Brien County Sheriff’s Office, PO Box 260 Primghar, IA 51245. Please note on the check K9 donation.

After searching for a canine trainer, a 1 ½ year old female black Labrador was located in late September of 2013. The canine named Ella was purchased from Midwest Canine Alternatives of Long Prairie, Minnesota for $5,200. The deputy handler was then sent to train with the new canine in Minnesota in late September. Ella received her appropriate certifications in narcotics detection, tracking and evidence/article searching. Ella started her “service” in early October 2013. Within a few weeks she has already had successful “finds” of illegal narcotics. 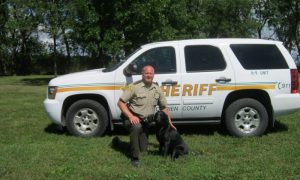 Deputy Reuvers and Ella are working patrol together and have had case successes already.

Canine training trials have been attended as necessary and certifications to meet those certification requirements were met in 2014.

She has become another viable tool for law enforcement in our efforts to combat illegal drug use.

Canine training trials and certifications will be attended as necessary to meet those certification requirements.

She has become another viable tool for law enforcement in our efforts to combat illegal drug use.